"That's My King!" Who Was Born As A Babe But Will Return As A Lion! 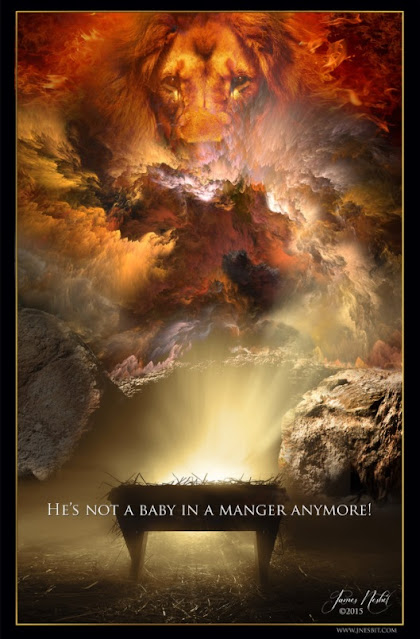 Isaiah told us 700 years before He was born that He would be conceived in the womb of a virgin!
And just like God said, Jesus was conceived by the Holy Spirit in the womb of the virgin Mary!
He's Immanuel, which means God with us!
He's the child Who was born, and the Son Who was given!
His name is Wonderful Counselor, Mighty God, Everlasting Father, Prince of Peace!
His name is Jesus for He did save His people from their sins!
The mighty angel Gabriel announced His coming into the world!
The impossible is made possible through Him!
He's worthy of all our songs of praise!
He's the Mighty One Who has done great things!
His mercy is from generation to generation!
He's scattering the proud!
He's toppling the mighty!
He's satisfying the hungry with good things!
And sending the rich away empty!

He has visited us to provide redemption for His people!
He is the Horn of Salvation raised up to save us from our enemies and all who hate us!
He'll bring us the knowledge of salvation and forgiveness of our sins!
His light is going to shine in darkness!
He's the Light of the world!
He upheld Caesar Augustus by the Word of His power so he would send out a decree that would determine His own birthplace!
The Prophet Micah declared the exact place of His birthplace hundreds of years before He was born!
The wicked Herod would try to kill him, even as a young child!
The beautiful, bright star would shine over His presence in the world!
Angels spoke of His glorious appearing!
Shepherds rejoiced in the coming of the King!
Yet no room was found for Him to be born in the inn!
No bed was available where He could lay His head!
He was homeless!
He was laid in the feeding trough of a cow!
He was wrapped in cloths and laid in that stone trough!
Later He died, was wrapped in cloths again and buried in a stone tomb!
But three days later He rose up from the dead and burst out from behind that stone rolled over the entrance to that tomb, never to die again because He conquered death forevermore!

That's my King! I wonder if you know Him today?!

His glory is magnificently shining!
Good news of great joy for all people is being proclaimed!
A Savior Who is Christ the Lord is born!
Glory to God in the highest and peace on earth!
The shepherds are preaching about the glory of my King!
All who hear them are amazed!
Mary is treasuring and meditating on the wonders of her Son!
Wise men are seeking Him!
The star He created and upholds by His own power that can't compare with the brightness of His glory is leading them to the Savior of the universe!
They shower Him with royal gifts: gold, frankincense, and myrrh!
That's my King!

Though wickedness is abounding, He will be victorious!
Though sin had no remedy, He will make all wrongs right!
Though Herod was killing all the little babies, He will cause all baby murder to cease!
Though mothers wept then, He will wipe away every tear from our eyes!
Though fathers were stunned and stumbling in disbelief, He will recover all sanity and stability!
Though there was no peace, He will restore peace on earth like none has ever seen!
Though there was no justice, He will cause righteousness, justice, and the glory of the LORD to cover the earth as the waters cover the seas!
In Him, hope is born!
In Him, salvation has come!
In Him prophecy has been fulfilled!
In Him, God has become man!
Yet He's the Sign Who will be opposed!
And a sword will pierce Mary's heart!
Because His cross is coming!
That's my King! Do you know Him?!

Joy to the world, the Lord has come!
Sing choirs of angels, sing in exultation!
Glory to the new born King!
He rules the world with truth and grace!
See within a manger laid, Jesus, Lord of heaven and earth!
Oh come let us adore Him!
Let every heart prepare Him room!
And go tell it on the mountain!
That Jesus Christ is born!
That's my King!
But He's not a baby in a manger anymore!
He lived a perfectly obedient life!
He never sinned at all!
He loved perfectly!
He served perfectly!
He did all that His Father asked Him to do!
And then He died on that cross and endured the fury and curse of Almighty God toward sinners!
He died and was buried!
But on the third day He rose from the dead, conquering sin, death, and hell once and for all time!
That's my King!
He's the Lion of the Tribe of Judah!
He's going to return to make war on all His and our enemies!
People will cry out for the mountains and rocks to fall on them to shield them from the wrath of the Lamb!
He's coming back riding on a white war horse!
He's coming back wearing a robe dipped in blood!
His name is The Word Of God!
The armies of heaven will be with Him!
He will have fire in His eyes and a sharp sword coming out of His mouth!
He will strike down the nations!
He will rule them with a rod of iron!
He will tread the winepress of the fury of the wrath of God the Almighty!
And on His robe and on His thigh He has a name written: "King of kings and LORD of lords!"
That's my King! That's my King!
Are you ready for the return of the King?!
Do you know Him?!
Posted by Joseph Randall at 7:15 AM