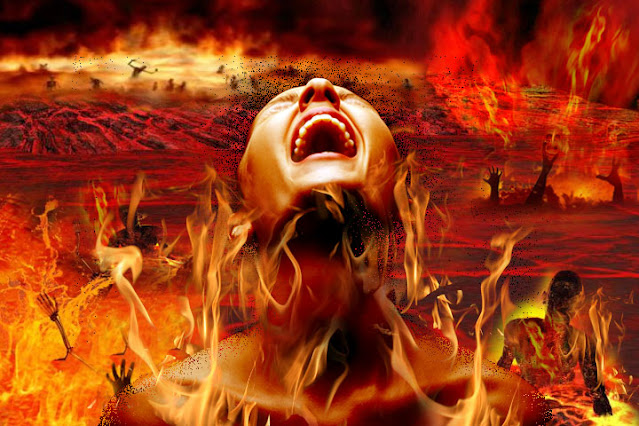 Go to Hell! by Lieutenant Colonel Art Athens, United States Marine Corps Reserve was originally published in the April 1997 issue of Command magazine, Vol. 46 No. 3, by Officers' Christian Fellowship of the United States of America, Englewood, Colorado. Reprinted/used with permission. For information on OCF: www.ocfusa.org

Then He will also say to those on the left hand, "Depart from Me, you cursed, into the everlasting fire prepared for the devil and his angels . . . ." (Matthew 25:41)

How do you react to the title of this column? Are you offended, shocked? Don't we strive to avoid saying these three words? From the mouth of a [mere] human being, they are profane, blasphemous speech. There is one person, however, who has both the authority and power to pronounce this judgment on a man or woman.

Jesus Christ claimed this right when He spoke to the disciples about the fate of the unsaved on Judgment Day. He said they will be sent "into the everlasting fire prepared for the devil and his angels." Jesus, the King of kings, will one day justly and authoritatively proclaim, "Go to hell," to those who have rejected Him as Lord and Savior.

We, on the other hand, may commit sin by expressing this condemnation indirectly - as when we fail to show interest in the eternal destiny of those whom God places in our paths. If we are unconcerned about their salvation, are we not saying by our silence, "Go to hell"? Why, when we know the way to heaven, don't we seek every possible opportunity to proclaim this "good news" to others?

Nine years ago, while attending a week of refresher classes, I struck up a relationship with a Marine captain sitting next to me. Our friendship grew, and I sensed by the end of the week that I should share the Gospel with Steve. I hesitated, and failed to tell Steve about Christ's sacrifice for him. My silence really communicated, "Steve, go to hell." About two weeks later, Steve lost his life in a helicopter collision over the Arizona desert. I grieved over Steve's death and my own impotence as an ambassador for Christ. I reconsidered my view of hell, my compassion for the lost, my approach to praying for the lost, and my readiness to present the Gospel. Think about the "Steves" in your life, as you consider these four questions:

First - Do you appreciate the horrors of hell? Have you forgotten the dreadful description of it in Scripture - the weeping and gnashing of teeth, and the everlasting torment. This is the place where God is present (Psalm 139:7,8), not in love and mercy, but in wrath and judgment. Is this a place you are willing for your friends and neighbors to go without so much as a warning from us?

Second - Do you have a burden for the lost? While attending the 1995 Army/Navy football game, I noticed that during the fourth quarter my wife, Misti, had tears running down her cheeks. Knowing Misti couldn't be that distraught over the game, I asked her why she was crying. She responded that as she looked at the thousands of midshipmen and cadets, she was grieving over how many were destined for hell. She had "great sorrow and continual grief" for the lost.

Third - Are you praying for boldness? It is fascinating that one of the Apostle Paul's primary prayer requests was for his own boldness in presenting the Gospel. He often risked his life to speak of Christ, but still considered it essential to have others praying for him to act boldly. We need to pray and to have others praying that we would witness boldly to the world.

Finally - Are you ready and able to articulate the Gospel? In 1 Peter 3:15, we are commanded to be ready to share the reason for our hope. We must know the Gospel as it is presented, for example, in 1 Corinthians 15: (1) Christ died for our sins; (2) He was buried; (3) He rose again the third day according to the Scriptures; and (4) He was seen by many after His resurrection. This Gospel must be so ingrained in our hearts and minds that we are ready to proclaim it at any time.

Our responsibility is not to make Christians - only the Holy Spirit can accomplish that. Our task is to be ready, available, loving and faithful. We are to be "ambassadors for Christ." The next time God places someone in your path who needs to hear the Gospel, may you say with great boldness, "Go to HEAVEN, and let me share with you how!"

FOR MORE INFORMATION ABOUT THE GOSPEL:

Read: For Your Joy, by John Piper

Posted by Joseph Randall at 2:05 PM