Christ Is The Greatest Fisher Of Men
He Loved And Served And Reeled Them In
Called Fishermen To Start Again
With Him A New Life To Begin
He Died A Rose To Save From Sin
So We Leave All And Follow Him
None Like Him Has Ever Been
With Him You're Guaranteed To Win!
That's my King! Do you know Him?!
Christ Taught And Preached And Healed Them All
Reversed Each Pain Traced From The Fall
His Fame Spread Far To Great And Small
Against Vile Forces He Would Brawl
Then Died And Rose, On Death Stands Tall
New Life He Brings And Will Enthrall!
That's my King! That's my King!
Posted by Joseph Randall at 3:12 PM No comments:

The False "I Am" Of Joel Osteen And The True "I AM" Who Alone Can Save! 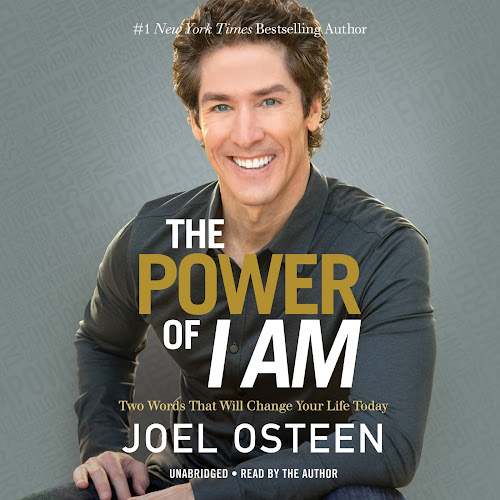 By God's grace, I've been preaching on the beatitudes (Matthew 5:3-12) and noticing how they are so diametrically opposed to what the wicked health, wealth, and prosperity false gospel preachers teach. Blessed are those who are poor in spirit, blessed are those who mourn, and blessed are those who are persecuted (to name a few)? Really? Yes!
I listened to a Joel Osteen sermon recently in which he encourages his hearers to be very careful about what they say after the phrase, "I am" because what follows the "I am" follows you. He warns not to speak negative words after the "I am" but positive words like:
"I am strong, I am healthy, I am talented, I am disciplined, I am focused, I am prosperous, I am getting younger, I am attractive!"
You can watch this madness here: Joel Osteen's The Power Of "I Am" Sermon
It's very sad that so many people are so deceived by this. It's very sad that Joel Osteen takes millions of dollars from people teaching these ridiculous lies. It's very sad that in a sermon on the phrase "I am" he does not even once mention all the great "I Am" statements of the Lord Jesus Christ Who is the great "I AM" Who came in the flesh to die on the cross for sinners and rise from the dead so that all who repent and believe in Him might be saved.
Please pray that he and his followers would repent and be saved by believing in the true Gospel of Jesus Christ.
What does God's Word actually teach? What have faithful followers of the God and Father of our Lord Jesus Christ actually said after their "I am" statements in the Bible? Come and see:

Jesus Is The LORD God Of Psalm 146 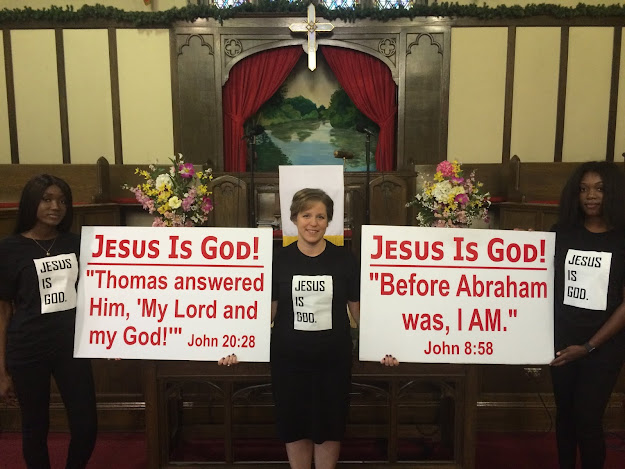 1. Jesus is worthy of our praise:
“Praise the LORD! Praise the LORD, O my soul! I will praise the LORD as long as I live; I will sing praises to my God while I have my being.” Psalm 146:1-2
“But when the chief priests and the scribes saw the wonderful things that he did, and the children crying out in the temple, ‘Hosanna to the Son of David!’ they were indignant, and they said to him, ‘Do you hear what these are saying?’ And Jesus said to them, ‘Yes; have you never read,’ ‘Out of the mouth of infants and nursing babies you have prepared praise’?’” Matthew 21:15-16
2. Jesus is the object of our trust Who gives salvation:
“Put not your trust in princes, in a son of man, in whom there is no salvation.” Psalm 146:3
“Do not let your hearts be troubled. Trust in God; trust also in me.” John 14:1
“This Jesus is the stone that was rejected by you, the builders, which has become the cornerstone. And there is salvation in no one else, for there is no other name under heaven given among men by which we must be saved.” Acts 4:11-12
3. Jesus is our Help:
“Blessed is he whose help is the God of Jacob, whose hope is in the LORD his God”  Psalm 146:5
“He is able to help” Hebrews 2:18
4. Jesus made heaven and earth:
“who made heaven and earth, the sea, and all that is in them” Psalm 146:6
“In the beginning was the Word, and the Word was with God, and the Word was God. He was in the beginning with God. All things were made through him, and without him was not any thing made that was made.” John 1:1-3
“For by him all things were created, in heaven and on earth, visible and invisible, whether thrones or dominions or rulers or authorities - all things were created through him and for him.” Colossians 1:16
5. Jesus keeps faith forever:
“who keeps faith forever” Psalm 146:6
“and from Jesus Christ the faithful witness, the firstborn of the dead, and the ruler of kings on earth. To him who loves us and has freed us from our sins by his blood” Revelation 1:5
6. Jesus executes justice for the oppressed:
“who executes justice for the oppressed” Psalm 146:7
“The Spirit of the Lord is upon me, because he has anointed me to proclaim good news to the poor. He has sent me to proclaim liberty to the captives and recovering of sight to the blind, to set at liberty those who are oppressed” Luke 4:18
7. Jesus gives food to the hungry:
“who gives food to the hungry” Psalm 146:7
“And taking the five loaves and the two fish he looked up to heaven and said a blessing and broke the loaves and gave them to the disciples to set before the people. And he divided the two fish among them all. And they all ate and were satisfied. And they took up twelve baskets full of broken pieces and of the fish. And those who ate the loaves were five thousand men.” Mark 6:41-44
8. Jesus sets the prisoners free:
“The LORD sets the prisoners free” Psalm 146:7
“He has sent me to proclaim freedom for the prisoners” Luke 4:18
9. Jesus opens the eyes of the blind:
“the LORD opens the eyes of the blind.” Psalm 146:8
“Great crowds came to him, bringing the lame, the blind, the crippled, the mute and many others, and laid them at his feet; and he healed them. The people were amazed when they saw the mute speaking, the crippled made well, the lame walking and the blind seeing. And they praised the God of Israel.” Matthew 15:30-31
10. Jesus lifts up those who are bowed down:
“The LORD lifts up those who are bowed down” Psalm 146:8
“The spirit shrieked, convulsed him violently and came out. The boy looked so much like a corpse that many said, ‘He's dead.’ But Jesus took him by the hand and lifted him to his feet, and he stood up.” Mark 9:26-27
11. Jesus loves the righteous:
“the LORD loves the righteous.” Psalm 146:8
“Jesus loved Martha and her sister and Lazarus.” John 11:5
12. Jesus upholds the widow and the fatherless:
“The LORD watches over the sojourners; he upholds the widow and the fatherless” Psalm 146:9
“As he approached the town gate, a dead person was being carried out – the only son of his mother, and she was a widow. And a large crowd from the town was with her. When the Lord saw her, his heart went out to her and he said, ‘Don't cry.’ Then he went up and touched the coffin, and those carrying it stood still. He said, ‘Young man, I say to you, get up!’ The dead man sat up and began to talk, and Jesus gave him back to his mother. They were all filled with awe and praised God. ‘A great prophet has appeared among us,’ they said. ‘God has come to help his people.’” Luke 7:12-16
13. Jesus will reign forever:
“The LORD will reign forever, your God, O Zion, to all generations. Praise the LORD!” Psalm 146:10
“But about the Son he says, ‘Your throne, O God, will last for ever and ever, and righteousness will be the scepter of your kingdom.’” Hebrews 1:8
“He will be great and will be called the Son of the Most High. The Lord God will give him the throne of his father David, and he will reign over the house of Jacob forever; his kingdom will never end.” Luke 1:32-33
Hallelujah! What a Savior!
Posted by Joseph Randall at 11:35 AM No comments:

Jesus Suffered The Anathematudes So That We Might Enjoy The Beatitudes 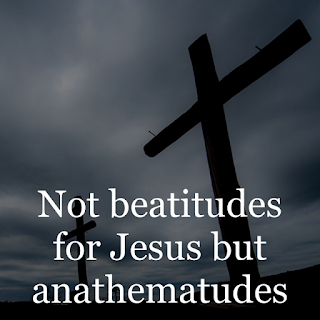