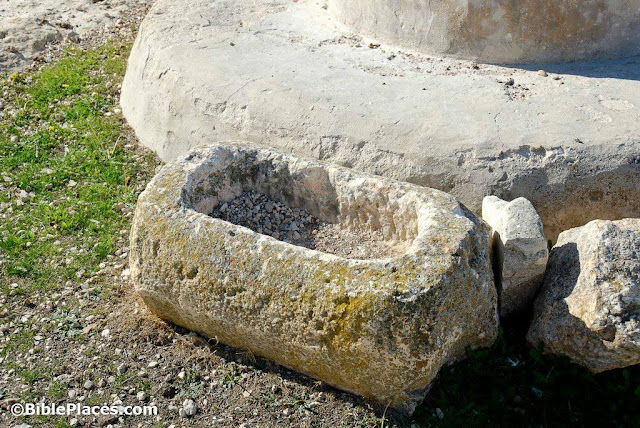 And she gave birth to her firstborn son and wrapped him in swaddling cloths and laid him in a manger, because there was no place for them in the inn. Luke 2:7

Notice Jesus was laid in a manger. Most popular depictions of the nativity scene portray Jesus lying in a wooden feeding trough. But this is not accurate. It would have been a stone trough like the one pictured above.

Thanks to Christmas cards and holiday movies, we usually think of Christ's manger as a wooden crib with straw. But it wasn't so. Mangers were carved from stone, like the one above. Archaeologists have found mangers at a number of sites in Israel, such as Megiddo, Tekoa, and Ramat Rahel.

How appropriate that the great Messiah and King of kings and LORD of lords, the One Who provides eternal living water (John 4:14) and spiritual food (John 6:35), was laid as a baby in a watering trough - in a feeding trough.

Sinclair Ferguson says that Jesus was laid in a feeding trough because He came to feed the spiritually hungry with good things (Luke 1:53).

From the very beginning, the events of the life of Jesus Christ point to and foreshadow the most important part of His life: His sacrificial death for sinners where He suffered the wrath of God to make atonement for their sins and His resurrection from the dead where He conquered sin, death, and hell forever!

Hallelujah! What a Savior!