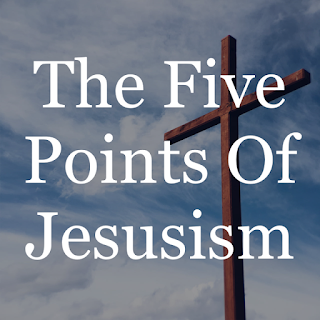 I am a five point JESUS-ist, and I firmly believe in each of the five points of JESUS-ism. Charles Spurgeon said:

That doctrine which is called "Calvinism" did not spring from Calvin; we believe that it sprang from the great founder of all truth. Perhaps Calvin himself derived it mainly from the writings of Augustine. Augustine obtained his views, without doubt, through the Spirit of God, from the diligent study of the writings of Paul, and Paul received them of the Holy Ghost, from Jesus Christ the great founder of the Christian dispensation.

Matthew 7:11: If you then, who are evil, know how to give good gifts to your children . . . .
Mark 7:21-23: For from within, out of the heart of man, come evil thoughts, sexual immorality, theft, murder, adultery, coveting, wickedness, deceit, sensuality, envy, slander, pride, foolishness. All these evil things come from within, and they defile a person.
John 6:44: No one can come to me unless the Father who sent me draws him.

John 15:16: You did not choose me, but I chose you . . . .
Luke 10:21: In that same hour he rejoiced in the Holy Spirit and said, “I thank you, Father, Lord of heaven and earth, that you have hidden these things from the wise and understanding and revealed them to little children; yes, Father, for such was your gracious will.”
John 17:9: I am not praying for the world but for those whom you have given me, for they are yours.

Mark 4:10-12: And when he was alone, those around him with the twelve asked him about the parables. And he said to them, "To you has been given the secret of the kingdom of God, but for those outside everything is in parables, so that 'they may indeed see but not perceive, and may indeed hear but not understand, lest they should turn and be forgiven.'"

John 5:21: For as the Father raises the dead and gives them life, so also the Son gives life to whom he will.

Matthew 24:22: And if those days had not been cut short, no human being would be saved. But for the sake of the elect those days will be cut short.

John 10:11, 26: I am the good shepherd. The good shepherd lays down his life for the sheep . . . but you do not believe because you are not my sheep.
Mark 10:45: For even the Son of Man came not to be served but to serve, and to give his life as a ransom for many.

Matthew 1:21: She will bear a son, and you shall call his name Jesus, for he will save his people from their sins.

John 6:37: All that the Father gives me will come to me, and whoever comes to me I will never cast out.

John 6:65: And he said, "This is why I told you that no one can come to me unless it is granted him by the Father."

Luke 14:23: And the master said to the servant, “Go out to the highways and hedges and compel people to come in, that my house may be filled.”


5. PERSEVERANCE OF THE SAINTS:

John 10:28-29: I give them eternal life, and they will never perish, and no one will snatch them out of my hand. My Father, who has given them to me, is greater than all, and no one is able to snatch them out of the Father's hand.
John 5:24: Truly, truly, I say to you, whoever hears my word and believes him who sent me has eternal life. He does not come into judgment, but has passed from death to life.
John 6:39-40: And this is the will of him who sent me, that I should lose nothing of all that he has given me, but raise it up on the last day. For this is the will of my Father, that everyone who looks on the Son and believes in him should have eternal life, and I will raise him up on the last day.

I have my own private opinion that there is no such thing as preaching Christ and Him crucified, unless we preach what nowadays is called Calvinism. It is a nickname to call it Calvinism; Calvinism is the gospel, and nothing else. I do not believe we can preach the gospel, if we do not preach justification by faith, without works; nor unless we preach the sovereignty of God in His dispensation of grace; nor unless we exalt the electing, unchangeable, eternal, immutable, conquering love of Jehovah; nor do I think we can preach the gospel, unless we base it upon the special and particular redemption of His elect and chosen people which Christ wrought out upon the cross; nor can I comprehend a gospel which lets saints fall away after they are called, and suffers the children of God to be burned in the fires of damnation after having once believed in Jesus. Such a gospel I abhor.

Hallelujah! What a Savior!
Posted by Joseph Randall at 8:30 AM

See a shorter version of the basic Gospel message here.