The Return Of The King! - Come LORD Jesus! 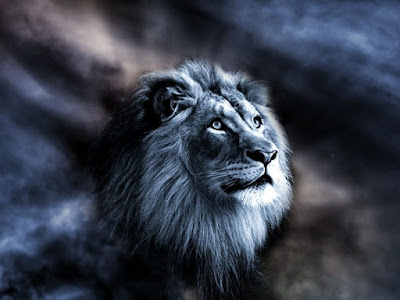 The return of the King - the LORD Jesus Christ - will be the most frightening, terrifying, angry, wrathful, and glorious, holy, satisfying, justice bringing, joyous event in the history of mankind. The Lion-like Lamb of God Who alone takes away the sin of the world is coming back to make war and destroy all of His and our enemies and the blood of the wicked will flow 5 or 6 feet deep for over 180 miles (Yes! This may be symbolic - but the reality will be even more frightening!).

"Believe on the Lord Jesus Christ and you shall be saved!" Acts 16:31

When he opened the sixth seal, I looked, and behold, there was a great earthquake, and the sun became black as sackcloth, the full moon became like blood, and the stars of the sky fell to the earth as the fig tree sheds its winter fruit when shaken by a gale. The sky vanished like a scroll that is being rolled up, and every mountain and island was removed from its place. Then the kings of the earth and the great ones and the generals and the rich and the powerful, and everyone, slave and free, hid themselves in the caves and among the rocks of the mountains, calling to the mountains and rocks, "Fall on us and hide us from the face of him who is seated on the throne, and from the wrath of the Lamb, for the great day of their wrath has come, and who can stand?" Revelation 6:12-17

Then I looked, and behold, a white cloud, and seated on the cloud one like a son of man, with a golden crown on his head, and a sharp sickle in his hand. And another angel came out of the temple, calling with a loud voice to him who sat on the cloud, "Put in your sickle, and reap, for the hour to reap has come, for the harvest of the earth is fully ripe." So he who sat on the cloud swung his sickle across the earth, and the earth was reaped. Then another angel came out of the temple in heaven, and he too had a sharp sickle. And another angel came out from the altar, the angel who has authority over the fire, and he called with a loud voice to the one who had the sharp sickle, "Put in your sickle and gather the clusters from the vine of the earth, for its grapes are ripe." So the angel swung his sickle across the earth and gathered the grape harvest of the earth and threw it into the great winepress of the wrath of God. And the winepress was trodden outside the city, and blood flowed from the winepress, as high as a horse's bridle, for 1,600 stadia. Revelation 14:14-20

Then I saw heaven opened, and behold, a white horse! The one sitting on it is called Faithful and True, and in righteousness he judges and makes war. His eyes are like a flame of fire, and on his head are many diadems, and he has a name written that no one knows but himself. He is clothed in a robe dipped in blood, and the name by which he is called is The Word of God. And the armies of heaven, arrayed in fine linen, white and pure, were following him on white horses. From his mouth comes a sharp sword with which to strike down the nations, and he will rule them with a rod of iron. He will tread the winepress of the fury of the wrath of God the Almighty. On his robe and on his thigh he has a name written, King of kings and Lord of lords. Revelation 19:11-16

NO KING BUT CHRIST!

Hallelujah! What a Savior!

Posted by Joseph Randall at 8:17 AM