The Inspiration For 9/11: Muhammad, The Quran, And Islam - Please Turn To The Prince Of Peace! 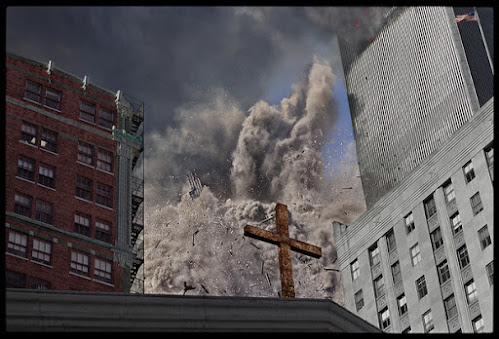 You may have heard that Islam is a religion of peace. This could not be further from the truth. Muhammad, the Quran, and Islam were the inspiration for the wicked and evil attacks that killed thousands of people on September 11, 2001. And it's good, right, and loving to tell this to Muslims and to the world.
I AM NOT saying that every or even most Muslims inspire hatred and violence. Thankfully, most Muslims do not follow in the footsteps of Muhammad, obey his teachings, or obey the violent commands of the Quran. What I AM saying is that Muhammad and the Quran command violence against those who are not Muslim and against those who leave Islam.

In Islam's most trusted sources, what did Muhammad and the Quran actually say about violence and peace?

The Violence Of Muhammad In His Own Words

Bukhari: 4.52.220: Muhammad said: "I have been made victorious with terror."
Bukhari 9.84:57: Muhammad said: "Whoever changed his Islamic religion, then kill him."
Sahih Muslim 1767a: Muhammad said: "I will expel the Jews and Christians from the Arabian Peninsula"
Bukhari 1.2.25: Muhammad said: "I have been ordered (by Allah) to fight against the people until they testify that none has the right to be worshiped but Allah and that Muhammad is Allah's Apostle, and offer the prayers perfectly and give the obligatory charity, so if they perform that, then they save their lives and property from me except for Islamic laws and then their reckoning (accounts) will be done by Allah."
Bukhari 4.52.176: Muhammad said: "You (Muslims) will fight with the Jews till some of them will hide behind stones. The stones will (betray them) saying, 'O 'Abdullah (slave of Allah)! There is a Jew hiding behind me; so kill him.'"

The Violence Of The Quran In Its Own Words

Surah 9:29: Fight those people of the Book (Jews and Christians) who do not believe in Allah
Surah 9:73: O Prophet! Strive hard against the unbelievers and the hypocrites and be unyielding to them.
Surah 9:123: O you who believe! Fight those of the unbelievers who are close to you, and let them find harshness in you
Surah 48:29: Muhammad is the Messenger of Allah, And those who are with him are severe against disbelievers, and merciful among themselves.
Surah 9:5: kill the infidel wherever you find them, seize them, besiege them
Surah 5:33: the penalty for those who wage war against Allah and His Messenger and strive upon earth is none but that they be killed or crucified or that their hands and feet be cut off from opposite sides or that they be exiled from the land.
Surah 5:51: O ye who believe! Take not the Jews and the Christians for your friends and protectors: They are but friends and protectors to each other.
Surah 8:12: I will cast terror into the hearts of those who disbelieve. Therefore strike off their heads and strike off every fingertip of them.
Surah 8:59-60: And let not those who disbelieve think that they can outstrip (escape from the punishment). Verily, they will never be able to save themselves (from Allah's Punishment). And make ready against them all you can of power, including steeds of war (tanks, planes, missiles, artillery) to threaten the enemy of Allah and your enemy, and others besides whom, you may not know but whom Allah does know.  And whatever you shall spend in the Cause of Allah shall be repaid unto you, and you shall not be treated unjustly.
Surah 2:216: Fighting is ordained for you
Surah 8:65: O Prophet! Urge the believers to fight. If there are twenty steadfast persons amongst you, they will overcome two hundred, and if there be a hundred steadfast persons they will overcome a thousand of those who disbelieve, because they (the disbelievers) are people who do not understand.
Surah 9:5: Then when the Sacred Months (the 1st, 7th, 11th, and 12th months of the Islamic calendar) have passed, then kill the Mushrikun (polytheists, idolaters, pagans, disbelievers in the Oneness of Allah) wherever you find them, and capture them and besiege them, and lie in wait for them in each and every ambush.
Surah 47:4: So, when you meet, those who disbelieve smite (their) necks till when you have killed and wounded many of them

Please Turn And Trust In The Prince Of Peace - The Lord Jesus Christ!

Isaiah 9:6: "For to us a child is born, to us a son is given; and the government shall be upon His shoulder, and His name shall be called Wonderful Counselor, Mighty God, Everlasting Father, Prince of Peace."
This was prophesied about Jesus Christ 700 years before He was even born! He is the Mighty God and the Prince of Peace Who alone can grant you peace with God and peace with others!
The Bible says God created all things, and He made you to be in a relationship with Him: to know Him, to trust Him, to love Him, to obey Him, and to glorify Him in whatever you do.
Genesis 1:1: "In the beginning, God created the heavens and the earth."
Matthew 22:37-39: "You shall love the Lord your God with all your heart and with all your soul and with all your mind. This is the great and first commandment. And a second is like it: You shall love your neighbor as yourself."
1 Corinthians 10:31: "So, whether you eat or drink, or whatever you do, do all to the glory of God."
The bad news is that we have all sinned against God, selfishly desiring our own will instead of His will, and we've sought to glorify ourselves rather than Him. We have failed to love God and to love our neighbors as we should. We've broken His good, holy, just, and loving laws – laws He gave us because He loves us and because He wants to help us live lives full of joy, peace, and satisfaction.
Romans 3:23: "for all have sinned and fall short of the glory of God"
Because of our sin, we deserve God's just punishment and curse in hell forever. But God so loved sinners that He sent His Son, Jesus Christ, into the world to save sinners by granting us peace with God:
John 3:16: "For God so loved the world, that He gave His only begotten Son, that whosoever believes in Him shall not perish but have everlasting life."
Romans 5:1: "Therefore, since we have been justified by faith, we have peace with God through our Lord Jesus Christ."
Jesus never sinned, but He died on the cross, bearing the anger and curse of God toward sinners, and then He rose up from the dead, conquering sin, death, and hell, so that if you turn from your sins and believe in Him, He will save you!
Acts 16:31: "Believe in the Lord Jesus Christ and you shall be saved!"
Ephesians 2:8-9: "For by grace you have been saved through faith. And this is not your own doing; it is the gift of God, not a result of works, so that no one may boast."
You cannot earn God's love and favor by doing good deeds, praying, giving alms, traveling to Mecca, or by being a good person. Adam and Eve were forced to leave God's presence in Paradise for committing only one sin, even though they had done many good deeds! God cannot be in the presence of even one sin! And you need all of your sins forgiven! Only through Jesus Christ can all your sins be forgiven. Only through Jesus Christ can you have peace with God and peace with your neighbors. He is God the Son, and He alone can save you and grant you peace: Jesus says: "Come to me, all who labor and are heavy laden, and I will give you rest." (Matthew 11:28)
This is the Gospel (the good news) God has sent to you! Please trust in God the Son and His Gospel today!
For a more detailed explanation of this Gospel, please watch this excellent documentary: American Gospel: Christ Alone.
For a wonderful testimony of a devout Muslim who came to understand that Islam is a violent religion and Muhammad was a violent man, and then also came to understand that Jesus Christ is the God-Man Who is the Prince of Peace and our only hope of salvation, please watch this video testimony of Nabeel Qureshi.
As you remember September 11th today, may Jesus Christ be your Prince of Peace. Now and forever!
Posted by Joseph Randall at 12:46 AM