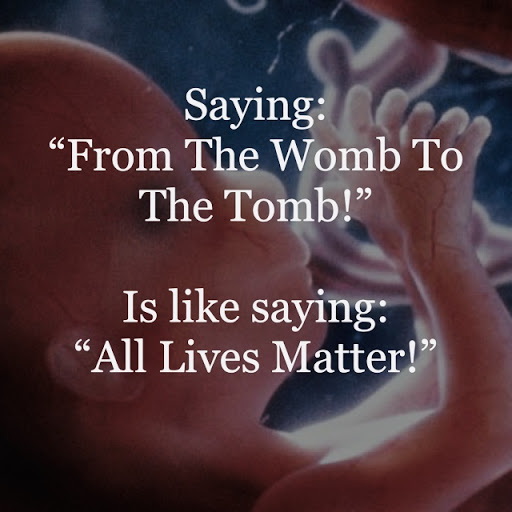 Saying you are pro-life "from the womb to the tomb" can be very similar to the response "All Lives Matter!" when someone says "Black Lives Matter!"

And it can be an indication that you really don't care much about unborn lives at all. Why focus so heavily on the murder and oppression of the unborn in the womb?

Because abortion is the only unthinkable sin mentioned in the Bible.

And because abortion is the worst social injustice ever:

Abortion kills the most innocent: an unborn child

Abortion kills the most helpless: a defenseless baby

Abortion is the cruelest: their heads and limbs are chopped off; their brains are sucked out

Abortion is the most prevalent: over 60 million children butchered in the U.S. since 1973; over 1.5 billion murdered worldwide since 1980 alone

Abortion is the most accepted: laws protect parent's rights to kill their own children

Of course we should be pro-life, from the womb to the tomb. But in the womb is where the greatest injustices and absolute unfathomable atrocities are happening to the greatest numbers of the most innocent and helpless human beings on the face of the earth. And it's all legal, protected by wicked, unjust laws! There is a reason the pro-life movement should continue to focus mainly on the unborn and not on "All Lives!" Scott Klusendorf writes in this DesiringGod Article:

One well-meaning pro-life organization insists the pro-life movement must not only save children but "programmatically" help others "build strong families, have healthy marriages, be better parents, and have thriving faith lives" — that, and promote responsible fatherhood.

Pro-lifers just got saddled with a backbreaking job description no single cause can pull off. True, as Christians we will care about many issues, but it doesn’t follow that the operational objectives of the pro-life movement must be broad as well. We do not establish “pro-life” credentials by diverting scarce resources from the unborn to take on issues that Christians with larger platforms and better funding are more than willing to address. That will kill the pro-life movement.

My friend John Ensor writes that to be "pro-life" means

to speak up on behalf of children being led to the slaughter, and to engage in the rescue of those children, and their parents, who are often victims of the big abortion lie. It doesn’t mean that, as Christians, we don’t care about other issues. It doesn’t mean we don’t try to help our neighbors when they are in trouble. But it does mean we will not dilute our organizational resources chasing after every conceivable extension of life, particularly when many of those other issues already have personnel and resources that dwarf those of dedicated pro-life organizations.

Pro-life students stand alone in their calling to save children. We need to help them fulfill it. We need to teach them how to stand well.

"For God so loved the world that He gave His only begotten Son that whosoever believes in Him shall not perish but have everlasting life." Jesus (John 3:16)

All for Jesus, Who deeply loves all the little children in the world.

Posted by Joseph Randall at 9:27 AM